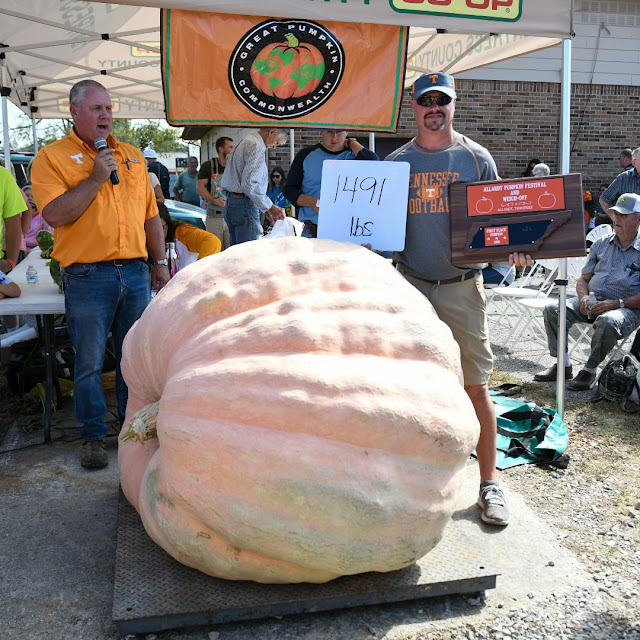 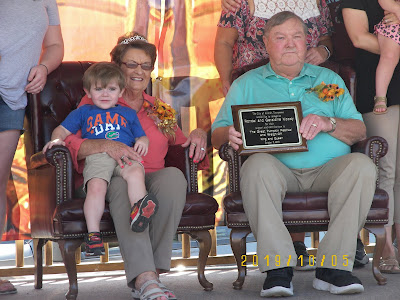 The tentative GPF Vendor placement list and map are posted on our Facebook page.  The GPF Committee reserves the right to make adjustments to the vendor placement, as needed. Maps and lists will be posted at the shelters in the park and assistance will be available at the Information Booth. Please adhere to the set up schedules on the Vendor Information Sheets. We are hoping to get most of the large trailers set up between 4:00 and 6:00 pm on Thursday, 10/3, or before noon on Friday. Non-trailers can start setting up at noon on Friday. 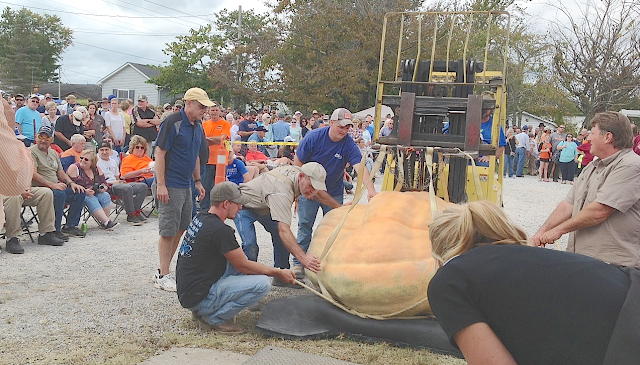 Click here for the form and all information about the pageant
Posted by Sandra Turner at 12:45

Allardt's 28th Annual Great Pumpkin Festival and Weigh-off is set for Saturday, October 5. (One day only.) Food and crafts vendors will be set up in Bruno Gernt Park all day.  (Allardt is in the Central Time Zone.)

Homemade Pumpkin Pie and Pumpkin Roll Contest – Registration of entries 8 a.m. – 9 a.m. Allardt Fire Hall. The $10 entry fee will go to the Allardt Volunteer Fire Department with the actual desserts being served with the meals purchased at the Fire Hall. All proceeds go to the Allardt Fire Department. The first place winners in each of the two categories will get $200 each with the 2nd place winners receiving $50. Winners announced on stage at noon.

Weigh-Off of Pumpkins and Other Vegetables – Register your pumpkins, squash, watermelons, and other vegetables from 8 a.m. to 9:45 a.m. at the Sandy’s Diner building. Entry fee $10. The actual weigh-off will take place between 10 a.m. and 1 p.m.  Allardt is an official GPC weigh-off site.
The big pumpkin winner must ride in the parade or be disqualified. See rules and regulations at www.allardtpumpkinfestival.com. Dwight Dickson will serve as master of ceremonies. John Gunter will serve as the Site Coordinator. (Weigh-off scales supplied by Fairfield Scales, Nashville.)

Thanks to Jordan Owens & The Jamestown Supercenter for providing a truck for the winning pumpkin.

Pooch Parade – This year’s newest event is a costume contest for your favorite dog! Entries will register at 4:00 pm at Allardt City Hall with the actual contest starting at 4:30 on stage at City Hall. Dogs will compete in one big category for the top 5 Best Dressed Pooches at the Pumpkin Festival. Any costume theme is acceptable. All entrants must stay on a leash and show proof of current shot records including rabies and distemper shots. Copies are not necessary. Proof of bordetella shots are encouraged, but not required. The entry fee of $10 per dog will go to support Best Friends Sanctuary, Pooch Parade Sponsor.

No fireworks this year because of the extremely dry conditions.

Crafts and Food Vendors  - Bruno Gernt Park, all day. All vendors set up anywhere in Allardt and who have not paid the fee are asked to purchase a vendor's permit for $25 at Allardt City Hall and keep it at their site during the festival. The permit verifies that vendors have helped support the festival by their contribution toward festival expenses. The vendor park is sponsored by Micro Metals and Top of the Hill Properties. Cathy Jeffers, event chairman. 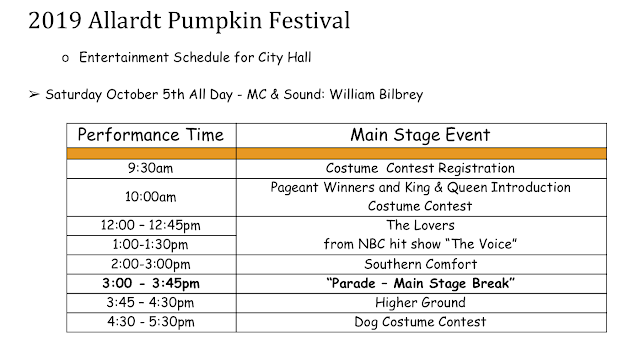 Registration for the Dog Costume Contest – The Pooch Parade – will begin at 4:00 pm beside the City Hall stage.


Pooch Parade – This year’s newest event is a costume contest for your favorite dog! Entries will register at 4:00 pm at Allardt City Hall with the actual contest starting at 4:30 on stage at City Hall. Dogs will compete in one big category for the top 5 Best Dressed Pooches at the Pumpkin Festival. Any costume theme is acceptable. All entrants must stay on a leash and show proof of current shot records including rabies and distemper shots. Copies are not necessary. Proof of bordetella shots are encouraged, but not required. The entry fee of $10 per dog will go to support Best Friends Sanctuary, Pooch Parade Sponsor.
Posted by Sandra Turner at 14:12

Click link for details
Posted by Sandra Turner at 13:17 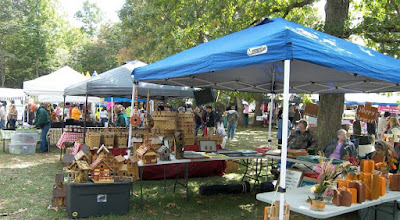