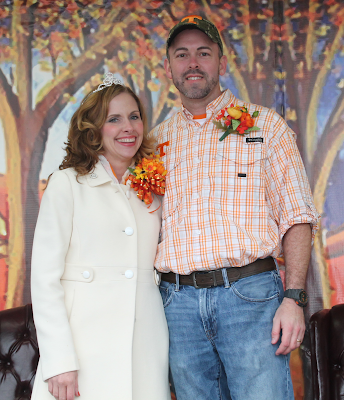 ............ Philip and Jenny Hall are lifelong residents of Fentress County. Philip represents the southern part of the county. A Banner Springs native, he graduated from Clarkrange High School in 1995. Philip then graduated from the University of Tennessee at Knoxville in 1999 and received his Doctorate of Pharmacy from Samford University in 2004.

Jenny represents the north side of Fentress County. Jenny grew up in Allardt. She graduated from York Institute in 1995, received her teaching degree in English in 1999 from Tennessee Tech, and her Masters Degree and EdS in Instructional Leadership also from TTU.

A true, North – South relationship blossomed for the two beginning during their high school years and into college. Philip and Jenny married in 1999, and this past June they celebrated 16 years of marriage.

The Halls own Hall Family Pharmacy and Soda Fountain in Jamestown. They attend Allardt First Baptist Church where Philip is a Deacon and just recently announced his call into the ministry as a preacher. Jenny is a youth leader, sings in the choir, and plays the piano and organ.

Philip and Jenny’s love for their community and their faith in God have permitted them to be one of the top financial and contributors of effort to many local civic and charitable organizations within the area.

The Halls partner with the University of Tennessee and Tennessee Tech University to maintain athletic endowment scholarships at each university. Philip and Jenny are huge supporters of the Big Orange and the Golden Eagles.

Philip and Jenny are contributors to education on a statewide and local level. Jenny has taught English at York Institute for 16 years and is the Humanities Coordinator at the school. In the past, she has served as the cheerleading coach for 8 years and a Student Council Sponsor. Currently, she is a Renaissance Coordinator.

Philip has served for 7 years on the Fentress County School Board. He is a Level 4 school board member for the Tennessee School Board Association.

The Halls annually contribute complete funding for all 4 elementary schools and the 2 high schools Science Fairs for the purpose of assistance in the expense for student supplies and awards.

Hall Family Pharmacy is the title co-sponsor for the Renaissance programs to promote positive student behavior and effort at both York Institute and Clarkrange High School.

Each year the Hall Family conducts a Vaccine Plus Charity event from September through December, where with each vaccine they administer at their pharmacy, they make a donation to a annually designated local charity.

The Halls are active contributors to the Fentress County Senior Citizen Center, the Fentress County Library, and the Fentress County Children’s Christmas Shopping Spree.
They maintain an active status with the Fentress County Agricultural Fair as a sponsor and exhibitor. Philip spent 6 years as a Fair Director helping the county fair win 2 Class A State Champion Fair Honors and 1 “Champion of Champion” Honor for fairs of all size and classification.
The Hall Family was recognized for their entrepreneurship and business practices at the Southeastern Rural Development Conference in Atlanta this past Spring. Their pharmacy practice has been recognized for “Outstanding Community Practice” by the National Community Pharmacist Association and the American Pharmacist Association.
The magazine, “American Pharmacist,” recently published a feature article on Hall Family Pharmacy and their efforts to better rural pharmaceutical healthcare.

Above all they say and do, it is their goal to be a good neighbor and glorify God. 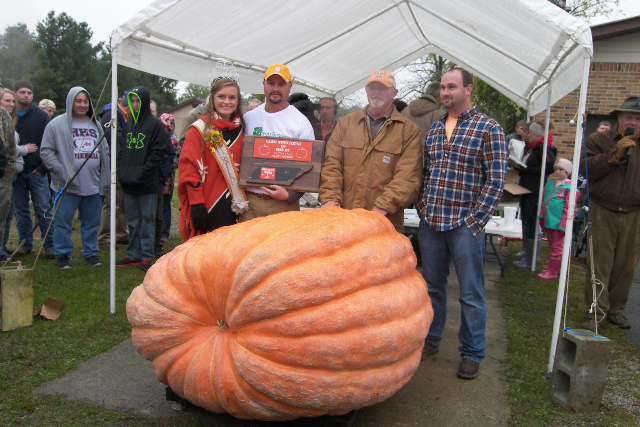 Additional winners at the Oct. 3 weigh-off ...... thanks to the Fentress Courier for the information....
John Brammer of New Hope, KY placed fourth (in pumpkins) with an entry weighing 709 pounds, followed by Gary Volkenand of Allardt with a 603-lb. entry.
Dewayne Porter of Dungannon, VA placed sixth with a 453.5-lb entry, followed by Gail Newsom of Pinnacle, NC at 396 pounds, and Suzie Zuerner of Arden, NC with an entry of 219 pounds.
In addition to taking first place and $1,000 for his entry, Jason Terry also was awarded the Howard Dill Award for the Best Looking Pumpkin.

In addition to the large pumpkins, there were also some giants entered in the Watermelon contest, with Chris Kent of Sevierville taking top honors with an entry of 294 lbs.

Although Kent’s entry was far short of the 350-lb. world record watermelon he grew two years ago, it was still a new Allardt Great Pumpkin Festival weighoff record, and almost 50 pounds heavier than the second place entry by Freddie Burcham of Ashland City, TN, who weighed in a 245.5-lb. entry, his personal best.

The Burcham family have been coming to the Allardt Pumpkin Festival nearly every year since the festival started, and are always very competitive with their watermelon entries.

Rounding out the Watermelon competition were Gary Volkenand of Allardt with a 103-lb. entry, and John Brammer of New Hope, KY with an entry of 84.5 pounds.

In a new division this year, Chris Kent weighed in a 213-lb. Bushel Gourd.

Some of the other winners included Rosetta Allen of Helenwood, TN. who weighed in a 6.5-pound sweet potato.

There were three entries in the Long Gourd competition, with Ova Stooksbury of Powell, TN taking top honors with an entry measuring 53.5”; Bill Watson of Knoxville placing second with a 40.5” specimen, and Jane Green of the Red Hill community with an entry of 36.5”. 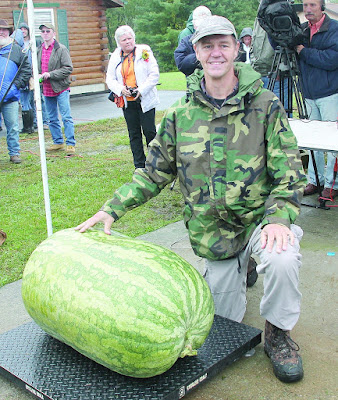 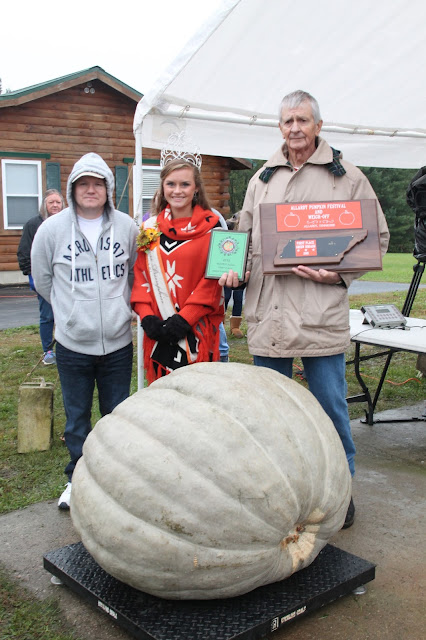 In the Green Squash category, Gary Volkenand of Allardt took top honors with an entry of 501 pounds. Dewayne Porter of Dungannon, VA showed  a 245-lb. entry. (thanks to the Fentress Courier)