to Top of the Hill Cabins 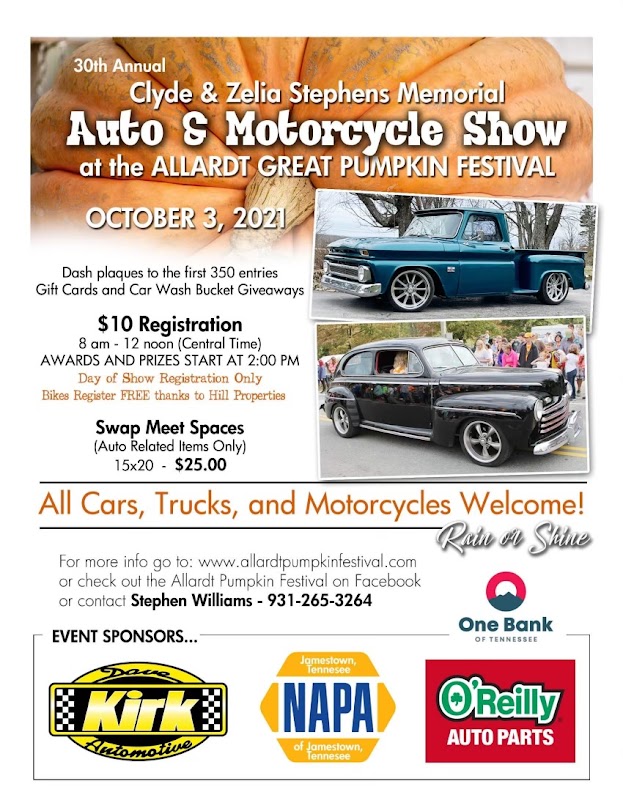 In a special 9:30 a.m. ceremony, the weigh-off will be officially renamed the "James Asberry Memorial Pumpkin Weigh-Off" at the weigh-off site (Sandy’s Diner building) Saturday, Oct. 2.

Businessman and farmer, the late Jim Asberry actually started the fever to grow giant pumpkins in this area when he grew a 716.5 pound pumpkin in 1991, the largest ever recorded in the state of Tennessee at that time.

From that year –when the first weigh-off was held at what was then Asberry's Store – the game was on and growers began their quest to grow ever bigger and heavier giant pumpkins.  The festival committee is thankful for Ms. Nina Asberry and her family for their unsurpassed contribution to this festival, which so many people from across Tennessee and neighboring states love and look forward to every year.

Prize money for the first place pumpkin and watermelon entries will double to $2000 and $1000 respectively for this year’s event.

Here are the new prize schedules:

This year, as usual, register your pumpkins, squash, watermelons, and other vegetables from 8 a.m. to 9:45 a.m. at the Sandy’s Diner building (Central time). Entry fee $10. The actual weigh-off will take place between 10 a.m. and 1 p.m.  Allardt is an official GPC weigh-off site.

Look for updates for the 2021 festival events in this newspaper, plus on the Allardt Pumpkin Festival Facebook page and at www.allardtpumpkinfestival.com.

Watch the Facebook page for the possibility of early on-line registration for weigh-off entries. A special thank you to UT Extension Agent, John Gunter, and his crew for overseeing the Weigh-Off. Thanks to the Weigh-Off sponsors already on board this year: Dr. Dilip Joshi, Fentress County Farm Bureau, Representative Kelly Keisling, Representavie John Mark Windle, and Union Bank!

Get info at this link about upcoming festival pageants.